The Strandloper Trail was started in the 1980’s by the Wildlife Society as an informal hiking trail. Donations from the Kei Mouth TLC, the Amatole Regional Services Council, Small Projects Foundation, the East London Museum, Iscor and the East Cape Nature Conservation provided the base for the revival of the Strandloper Trail.

A Section 21 Company (Association not for gain) was established in June 1996 to develop the Trail and manage it’s operations – and so the Strandloper Ecotourism Board was born.

SETB has also established the Ecotourism Centre at the Cape Morgan Mine Complex which it hopes to use as an Environmental Education Centre in the near future.

The term Strandloper derives from the Dutch, Strand  meaning beach and Loper  meaning walker, and refers to a way of life rather than a distinct linguistic or racial group. It embraces all who have roamed our shores, combed our beaches and foraged and fished on the rocks from earliest times to the present; including the Bushmen, the Khoi and the Xhosa as well as shipwrecked sailors and seaside settlers.

Shell midens along the coast indicate the presence of regular foraging visits to the coast to harvest mussels and other shellfish.

The wild waters of the south-eastern coast of Africa have caused many ships to founder along the shore. Of special interest are the very early Portuguese carracks, three of which came to grief along the Strandloper Trail. The wreck sites have been distinctively marked by the presence of shards of porcelain which have been observed and collected by beachcombers for many years.

SANTA ALBERTO 1593 – This sailing ship came ashore at Sunrise on Sea during a violent storm. Although many passengers and crew were drowned when the ship struck the shore, the remarkable way in which the ‘castle’ separated from the hull and grounded meant that when the tide went out at dawn, most of the remaining people were able to get ashore ‘dryshod’.

SANTO ESPIRITU 1608 – Very little is recorded about this wreck other than that the survivors built a boat and sailed to Mozambique. The presence of porcelain and carnelian beads have been found in abundance near the mouth of the Quko River.

NOSSA SENHORA DA ATALAIA DO PINHEIRO 1647 – This sailing ship came ashore about midway between Cefane and Cintsa. It was carrying porcelain, spices and a cargo of bronze cannon when it foundered during a huge storm.

JAMES GIBSON 1874 – This wooden barque was wrecked near Cape Henderson during a gale.

SS KHEDIVE 1910 – A German steamer which also came to grief at Cape Morgan, had its crew rescued by a local farmer, who took them to East London. The German government presented him with a bronze statuette in appreciation of his kindness. 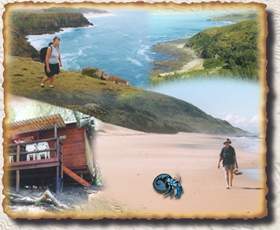